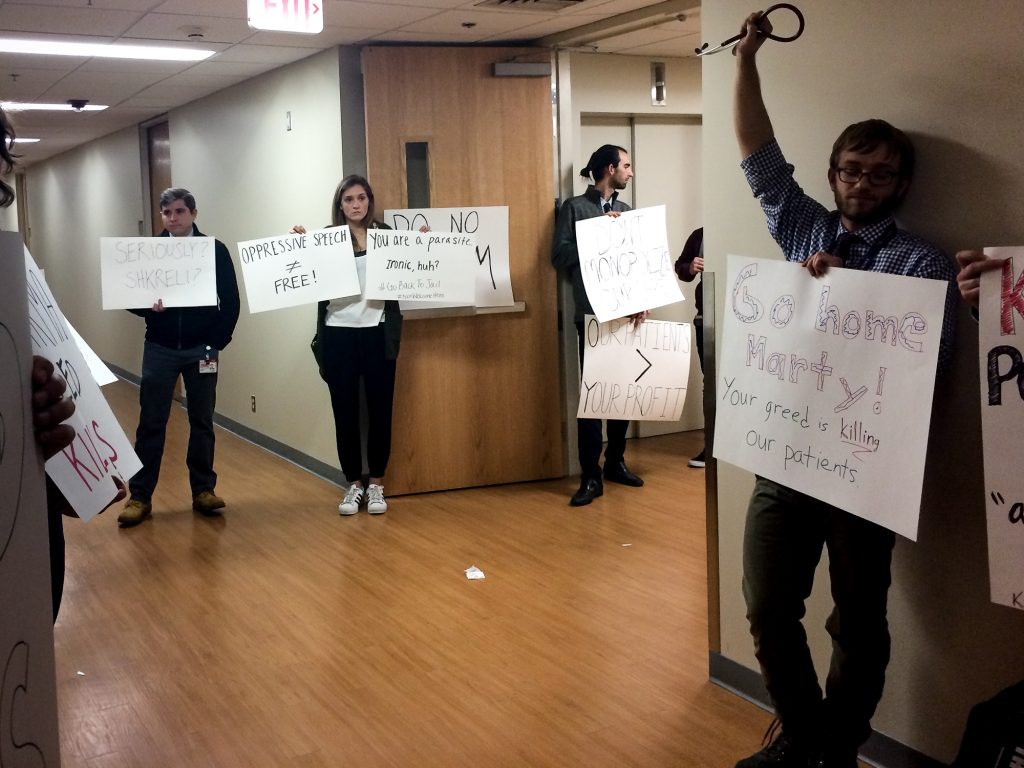 Boston University School of Medicine students and faculty were incensed by the presence of infamous former pharmaceutical executive Martin Shkreli on their medical campus Wednesday, holding up signs in the hallways and organizing last-minute protest events to voice their displeasure.

Once dubbed “the most hated man in America,” Shkreli was invited to speak at the medical campus by medical students taking a business elective called Leadership and Innovation in Medicine and Business (LIMB). While he spoke to students in a third-floor classroom, another group of students and faculty hosted a protest event in another part of the building at the same time. The group then marched upstairs and silently held up handmade signs in the hallway outside the classroom where Shkreli made his remarks.

Shkreli, the former CEO of Turing Pharmaceuticals, gained notoriety last year for increasing the price of a lifesaving medication from $13.50 to $750 per pill. The drug, Daraprim, fights parasitic infections and is particularly important for AIDS and cancer patients whose immune systems are not able to fight infections as effectively.

He faces charges for securities fraud unrelated to the drug price hike, but is currently free on $5 million bail. A judge granted approval for his travel to Massachusetts to speak at three universities.

Before hosting Shkreli, LIMB, which provides a forum for medical students to schedule speakers and host discussions related to the economics of medicine, wanted to make one thing clear.

Students protest outside of Martin Shkreli’s talk at the Boston University School of Medicine on Feb. 15. Photo by Dara Farhadi/BU News Service

“An invite is not an endorsement,” said Alex Rothkrug, a second year medical student and LIMB leader.

The purpose of LIMB is “to give students exposure to the world of business as it intersects with health care,” said Taylor Conroy, another LIMB leader. “We just want to give people an opportunity to critically think and engage with people from a very different perspective.”

“This is obviously not the school’s position and it’s not even our position. We’re opposed to the decisions he made and his pure business, money-focused agenda,” Rothkrug said.

Shkreli opened his talk with his self-professed humble upbringing and entrance into the world of hedge fund management at the age of 17, describing his financial endeavors as “betting on the success of medicine.” He then transitioned to explain how he prices drugs, making the argument that lifesaving pills and health care in general are valuable and worthy of higher prices. He objected to the idea of people paying comparable amounts for a disposable razor and a lifesaving drug, and said that drugs should be priced to reflect what they save the healthcare system in overall costs.

“I don’t think it’s a bad thing that Americans spend a lot on healthcare,” Shkreli said. “I could see us spending a third of our money on healthcare.”

He also offered up his treasured Wu-Tang Clan album, which he purchased in 2015 for a reported $2 million, to anyone in the audience who could recite specific details about an extremely rare condition. None of the attendees spoke up.

Andrew Olsen, a student in BU’s physician assistant program and a leader of the school’s Students for a National Health Program (SNaHP) chapter, caught wind of Shkreli’s visit the night prior to the event– only hours after the talk itself was arranged. When the news leaked, he and his group immediately began to discuss what to do to voice their opposition.

“Martin Shkreli stands for everything that is bad about our current healthcare system,” said Andy Hyatt, a third year medical student and member of SNaHP.  “I think we were a little floored that he was getting invited here to BU.”

“We’re dedicated to providing ‘exceptional care without exception,’” he said, referring to Boston Medical Center’s mission statement and status as a safety net hospital. “It seemed pretty contrary to the ideals of our school to have Shkreli here.”

A lengthy exchange among the members of SNaHP on the GroupMe app led to a poster-making session earlier in the day, along with a protest event concurrent with Shkreli’s talk. The event, which was dubbed a “teach-in,” featured faculty members from the School of Medicine and the School of Public Health and was meant to provide additional context to Shkreli’s actions.

George Annas, the director of the Center for Health Law, Ethics & Human Rights at the Boston University School of Public Health, was one of the faculty members at the teach-in. He weighed in on the drug pricing debate, saying: “They say ‘if you don’t give us money, we can’t make lifesaving drugs.’”

He disagreed. “They’re just changing the formulas,” he said, referring to the small changes that drug companies make on existing medications to extend patents that may provide little to no clinical improvement.

After Shkreli’s talk, the two student groups came together for a joint discussion.

“As things evolved, LIMB reached out to us, decided we had some legitimate concerns and decided they wanted to have a conversation with us,” said SNaHP’s Hyatt.

“We do not want his agenda to be [our] agenda,” said LIMB’s Conroy during the discussion.

Medical students from both of the groups gave their thoughts.

“We do want to be aware that there is a whole group of people who in a large part run our health care who are business-minded,” Conroy said.

“We do have different perspectives on working within the system versus working outside the system,” Hyatt said. “I think it’s important to recognize that both approaches have big drawbacks, but also have some things working for them.”

In contrast to the calm civility at Boston University’s medical campus, Shkreli was met with a wall of protesters armed with signs and a megaphone outside the Harvard Science Center, where he was also scheduled to speak later in the evening. As his talk was about to begin, someone pulled the fire alarm and the attendees were ushered outside. A condensed mob of people included protesters chanting “Pharma greed kills!” as others insisted on Shkreli’s right to free speech.

“I think he has a right to say it, but it doesn’t mean that I have to be happy about it and that doesn’t mean I can’t shout over him,” said Abby Brockman, a Harvard graduate student participating in the protest. “I feel that freedom of speech is taken to mean that protesting is wrong, but protesting is also a part of the Constitution. It’s in its DNA.”